A 2013 survey of 5,500 unmarried adults asked them to rank the qualities by which they judge the opposite sex on first meeting someone new.  Teeth was the highest ranked characteristic by a long shot (58% of men and 71% of women ranked it the #1 feature by which they judge a member of the opposite sex for attractiveness).  Americans spend $1.4 billion on teeth whitening products.  (Click here to see this and other interesting statistics about teeth whitening from research conducted by the American Academy of Cosmetic Dentistry.)  Globally, teeth whitening is a $3.2 billion industry.  If you are on social media, you have probably seen at least one DIY whitening trend.  Teeth whitening is one of the quickest and easiest ways to improve a smile.

What is Teeth Whitening?

The risks associated with this type of teeth whitening is the removal of enamel or exposed root surfaces.  This risk is the main concern that dentists have with DIY whitening trends: they can cause irreversible loss of tooth structure.  Teeth will initially appear whiter, and as the abrasion continues and enamel becomes thinner, the underlying dentin will begin to show through, making the teeth look darker over time.

The best way to lessen this risk is to use whitening toothpastes with the American Dental Association’s seal of approval because their abrasivity has been tested and confirmed to be safe for tooth structure.  Also, make sure to follow the manufacturer’s instructions when using a whitening toothpaste.

Teeth whitening can also involve bleaching the enamel and underlying dentin tooth structure with chemical compounds containing peroxides.  Because bleaching the teeth does not remove any tooth structure, it can actually be safer for your teeth.  Many over-the-counter products contain peroxide chemicals for bleaching and are safe when used as instructed.  This blog will address the professional whitening options offered at Prosper Family Dentistry, all of which are bleaching agents containing peroxides. 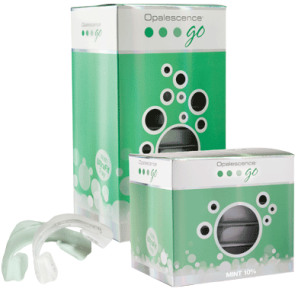 Opalescence® GO is a set of prefilled disposable whitening trays containing either a 10% or 15% hydrogen peroxide whitening gel.  GO is available in a 10-tray pack or a 4-tray maintenance pack.

Opalescence® BOOST In-Office Whitening is the way to go for an instantly whiter and brighter smile.  This option gives you instant gratification and is perfect for an upcoming special event or for those people who just do not have time for at-home whitening.  In one session of BOOST, you will achieve the same results you would get with multiple days of whitening your teeth through the first two methods of at-home whitening.  Basically, we do all the work for you!  Opalescence® BOOST is 40% hydrogen peroxide, which means it is strong and works fast.

View all posts by prosperfamilydentistryblog